10 things you didn't know about Amsterdam 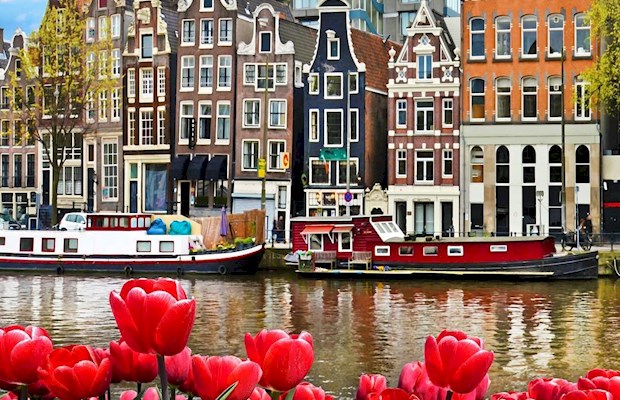 The capital of The Netherlands attracts millions of visitors each year and it’s really not hard to see why.

When most people think about Amsterdam, they naturally think of the most famous attractions - such as the Anne Frank House, the Van Gough Museum, the controversial Red Light District and the popular ‘coffeeshops’ which sell… goods…to millions of visitors every year. However, there are so many unique aspects to this beautiful and vibrant city that you probably didn’t know about!

If you have never visited before and are planning a trip, this blog is definitely for you - and if you have been before, you will be kicking yourself for not investing some time in to a bit of hardcore research (like we have done to create this guide)! But hey ho, that’s an excuse for another trip, right?

So here we are, ten things you didn’t know about Amsterdam - which may just seal the deal when you’re deciding which city to visit next.

1. There are some fantastic restaurants in the heart of the Red Light District.

If you’ve never been to the Red Light District before, it may seem a little daunting. But contrary to popular belief, the Red Light District is one of the safest and friendliest places in Amsterdam due to its constant police presence. If you have been before, it’s likely you were too caught up in the lively atmosphere of the community of tourists to notice all the great restaurants in and around the district.

So, if curiosity gets the better of you, what better way to experience this exciting part of town than by enjoying dinner there?

Continuously praised for its generous portions and delicious food, Bird Thai Restaurant is located in the heart of the district. Bird Thai is renowned for its authentic atmosphere and ability to make guests feel as though they are back in Thailand with its ‘real Thai food’. It’s also a fantastic venue to visit if you want to hang around the hustle and bustle for a bit longer.

If you want to experience the Red Light District but don’t quite fancy eating your dinner in the heart of it, then be sure to head to Kam Yin, just a two minute walk from the district. Offering fantastic Chinese at a reasonable price with friendly and attentive staff, the restaurant usually has pretty full tables in addition to a calm atmosphere. It’s also a great place to have a drink or two on your way to the district (if you need to prepare yourself before heading into the most controversial part of Amsterdam)! 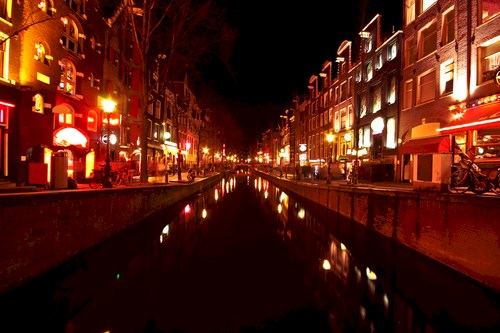 2. 63% of Amsterdammers use their bike every day

One of the first things you will notice when you arrive in Amsterdam is the plethora of bikes making their way through the city. It doesn’t take long to get used to this busy transport system, but be aware as the locals can be pretty speedy.

Compared to around 610,000 Londoners, Amsterdam experiences an impressive 800,000 people using their bikes on a daily basis – Londoners, you need to up your game! Not only is this a cheap and eco-friendly mode of transport, it comes with added health benefits and is a great way for tourists to explore more of what the city has to offer, just like a true local! 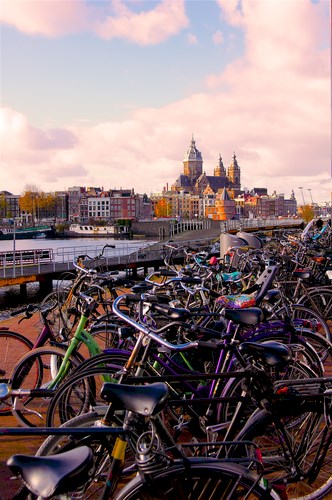 3. There is a Buddhist temple in the heart of Chinatown.

Yes, you heard right - there is a Buddhist temple in the heart of Amsterdam. This is actually Europe’s largest Buddhist temple and if you’re visiting at the right time, you’ll be lucky enough to see the Monks and Nuns make an appearance on the balcony. Located near the Red Light District, The Fo Guang Shan is often described as a peaceful place to go in a busy area and is built in a traditional Chinese style with special roof tiles flown in from China.

The temple offers guided tours on Saturdays, during which you can learn about everything Buddhist and feel as though you’re in Asia for a day! Make sure you don’t miss the shrine to Kuan Yin, famous for its apparent ability to see all the suffering in the world and thus come to the aid of people.

If you visit Amsterdam during the Chinese New Year then this is an even better excuse to head down here and experience the loud bangs of firecrackers and traditional lion dances. 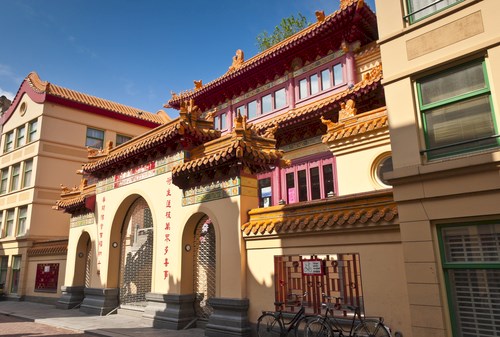 4. April is the driest month of the year in Amsterdam

Forget April showers! Amsterdam’s average rainfall is at its all-time lowest in April. If this alone is not enough to convince you, April’s arrival also means that Spring is here - probably one of the best times to visit the city.

Amsterdam is at its prettiest in April as the flowers and the blossom have bloomed, there are less tourists and everyone is taking advantage of the first sun of the year. April is also the beginning of some of Amsterdam’s best festivals such as King’s Day, where locals and tourists meet to celebrate day and night from the canals and the streets… beautiful scenery and great atmosphere? Yes please!

This is truly not a time of the year to miss, and of course you are less likely to need your rain coat. 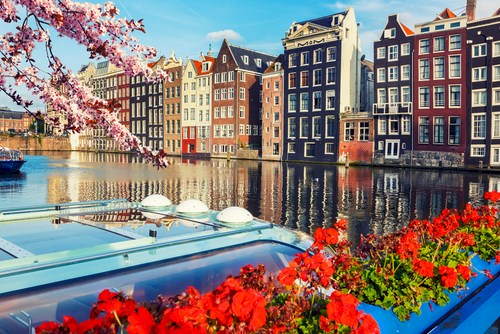 5. There is a piece of work by Picasso himself in the heart of Amsterdam

Vondelpark is the largest city park in Amsterdam and is a great place to do some exercise or just chill out and people watch, however, a large number of tourists walk through the park and straight past this sculpture every year without realising they have just passed a famous piece of art work.

The sculpture is named by many people as “The Fish” which is quite self-explanatory when you look at it, however it is actually titled ‘Figure Découpée l’Oiseau’ which translates to ‘The Bird’. The sculpture was donated in 1965 under the condition that it will be displayed permanently in the park and to this day it is still standing tall and is certainly something to look out for.

6. Coffeeshops are not entirely legal

No, we don’t mean coffee shops where you fill up on your daily dosage of caffeine and watch the world go by, we mean coffeeshops - where millions of tourists head to every year to take advantage of the… specialist products on offer..

When most people think of smoking in Amsterdam coffeeshops, they assume it’s as legal as it is to smoke a cigarette, however this is far from the truth. Cannabis is not actually legal in The Netherlands, it is just tolerated in ‘coffeeshops’ for low-volume sales to the public. However, supply to these shops is not tolerated, which results in the employment of third party buyers to source it and sneak it in through the back door! (Yep, we’re confused as well). 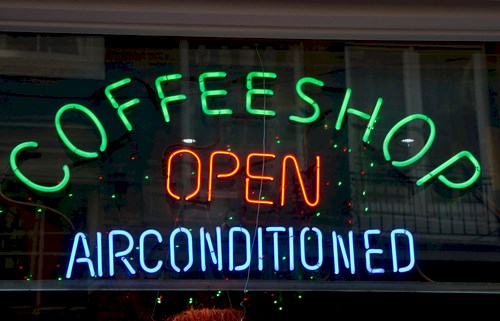 7. Amsterdam has some beautiful beaches

Amsterdam doesn’t exactly spring to mind as a place with beautiful beaches, but the city really does boast a good few spots to soak up the rays. From nature reserves to popular tourist beaches, Amsterdam has you covered for whatever takes your fancy during the day and offers some amazing beach bars to watch the sun go down while you enjoy a glass of vino or two. We recommend Bloemendaal aan Zee which offers beautiful sandy beaches to relax on in the day and an opportunity to get your dancing shoes on when the sun goes down with a selection of beach bars, clubs and regular live entertainment. 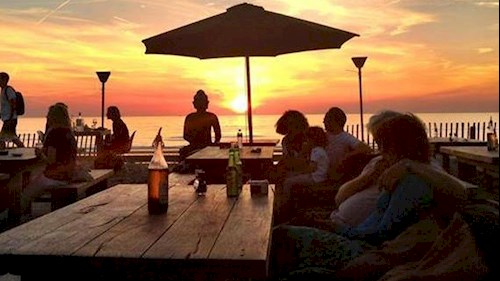 8. There is a whole boat dedicated just to cats

So, you’ve most likely heard of the house boats that live on the canals, but have you heard of the cat boat? Calling all cat lovers, this one’s for you.

Supported entirely by donations; not only is this a sanctuary for stray cats, it has been one since 1966 and volunteers give their time up to feed and look after these adorable animals. With around 50 cats on the boat at any given time, this is cat lover heaven -  history and good deeds all in one! 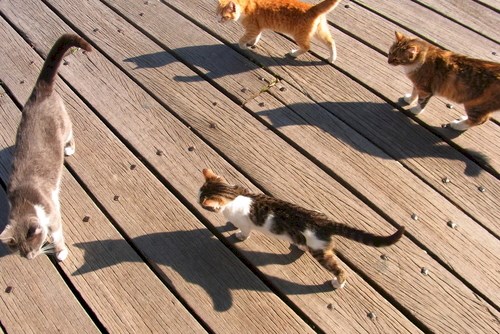 9. Opening a hidden wooden door on a busy street will lead you to a secret garden

Ok, so it’s not entirely a secret garden, but it’s two hidden entrances give it a mysterious and secret feel while you enter one of Amsterdam’s oldest courtyards.  Named Begijnhof, this well-kept garden is overlooked by Amsterdam’s oldest surviving house - built around 1420.

Some of the main features of this courtyard include the English church, the chapel and a number of traditional Dutch houses. It’s not a place that will fill up your whole day, but it’s a must visit if you’re planning on some extensive exploring. 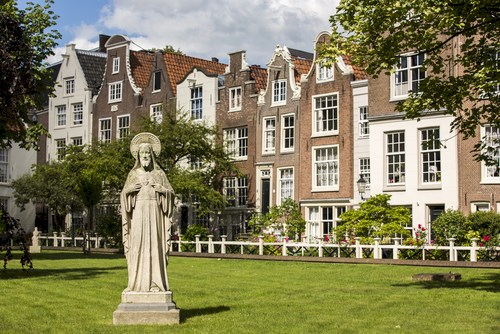 10. You can literally pop over to a stranger’s house for dinner

So, hosts invite their guests round, cook up a feast and host a dinner party… sounds normal. Not quite! All these guests are complete strangers (apart from those who keep coming back for more) who go to a stranger’s house and have dinner together.

The thought of it may be a bit strange and it might even take you out of your comfort zone, but this is an experience that you most likely won’t forget and you will get to enjoy some good homemade food too. It’s most likely not the usual tourist thing that you’re used to doing when on holiday, but what a great way to make a memory in Amsterdam and meet new people!

Guaranteed to be a delicious, fun and relaxing night, this is most likely to be one of the highlights of your trip. 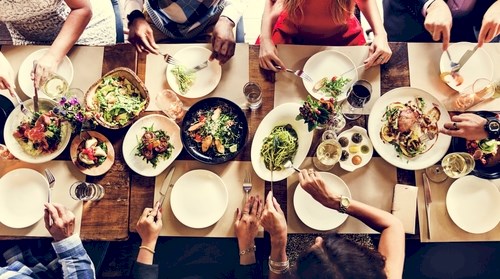