What you need to know about Israel

For a country the size of Wales, Israel has a wealth of unexpected natural and cultural variety. It’s the world’s only Jewish-majority state, which historically has embraced an austere and low-key way of life.

Over the past 40 years, however, Israel has blossomed into a cosmopolitan, vibrant nation, with a much improved standard of living and a booming economy. It’s the contrast of old and new that makes Israel so fascinating and delightful; the sacred sites of the Holy Land and Jerusalem have a timeless and haunting charm, yet only 50 miles away is Tel Aviv, with its glass skyscrapers, cocktail bars and beaches full of bikinis and surfers.

Travel 30 miles in the other direction from Jerusalem and you’ll discover the eerie deserts and unique salt flats of the Dead Sea. Few countries have such rich history, such diverse culture, and such extraordinary appeal.

Israeli food has historically focussed on simple and healthy dishes using local ingredients, and ethnic foods have had little appeal or influence.

But times have changed dramatically in Israel, and now the country has taken fine food and wines to its heart, with a new generation of imaginative Israeli chefs creating innovative dishes that blend traditional Israeli cooking with a touch of international flavour and style.

Most foodies head for Tel Aviv, but the standard of food has improved all over Israel. Local food is much closer in style and flavour to traditional Arabic and Middle Eastern dishes than old-world Jewish recipes – make sure you feast on a mezze while you’re visiting. Wine has been made in Israel since biblical times, but the modern Israeli wine industry is thriving, creating a delicious range of reds, whites and roses.

Shopping in Israel is as diverse and exciting as the rest of the country, from the glossy designer stores and malls of Tel Aviv to wonderfully animated traditional Jewish markets.

The best are Carmel Market in Tel Aviv and Machane Yehuda in Jerusalem – they’re great places to buy food, with produce that is fresh and good value.

The Malkha Mall in Jerusalem is the largest in Israel, offering a good mix of imported items and locally-made fashions and crafts. Tel Aviv has entire streets full of shops devoted to particular items – you can find areas that sell nothing but spices, wedding dresses, fashions, textiles, furniture or art.

Israel is a melting pot of Jewish communities from all over the world, so it represents a vast range of cultural and religious traditions. It’s the only country in the world where life revolves around the Hebrew calendar, which defines everything from work and school holidays, and the official rest day, which in Judaism is Saturday.

There is plenty of Arabic influence in evidence too, particularly in Israel’s music, architecture and cuisine. Israel has over 200 museums and orchestras in every city, and the country holds tight to its traditions of folk dancing despite the lure of Tel Aviv’s nightclubs and a growing dance music scene.

For modern Israelis, the culture is ever-changing, as western wealth and prosperity have begun to shift the sands of traditional culture and values, along with the long-running turmoil and flux in the region, particularly near the border with Palestine. But for now Israel is a wonderful mix of modern and traditional, with a uniquely Jewish culture that can’t be found on such a scale anywhere else.

Buses are the main mode of transport between cities in Israel, although there is a train link between Jerusalem, Tel Aviv and Haifa. Taxis are good value, and many people travel in shared taxi vans for longer distances.

Driving yourself around the cities isn’t recommended - traffic jams are common, parking is pretty much impossible and the road layout in most of the cities is confusing and frustrating.

However, if you’re heading along the coast or out toward more rural areas, a hire car will give you far more flexibility than public transport, which really only covers the main towns and cities. It’s a small country, so most places are accessible in a few hours.

There are amazing hiking trails in the deserts of southern Israel where you can explore a stunning landscape and many unique geographical features. However you need to get properly kitted out with the right clothes and equipment, as well as plenty of water – days here are hot, nights are cold, and flash floods are not uncommon. 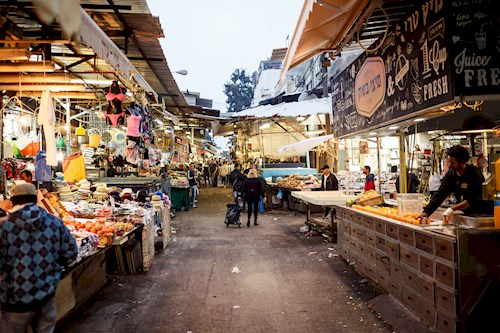