We have lots of apartments in Krakow

Where to stay in Krakow

Where to stay in Krakow

Where to stay in Krakow... Show all apartments in Krakow
All you need to know about Krakow

Krakow is an alluring and fascinating city in the south of Poland, with hundreds of years of culture and history at every turn. A visit to the city spans 1000 years of survival and political upheaval – you can explore the medieval walls of the old town, the beautiful 16th century Wawel Castle, or the many monuments to the city’s Nazi occupation in WWII.

Schindler’s Factory is a must-visit – it’s an extraordinary interactive museum located in the factory owned by German industrialist Oskar Schindler, who famously saved the lives of many of his Jewish labourers during the Holocaust. Wartime history aside, modern Krakow is a cool and cosmopolitan Polish city, with some outstanding museums, galleries and parks – it’s a lovely city to simply wander and soak up the sights. 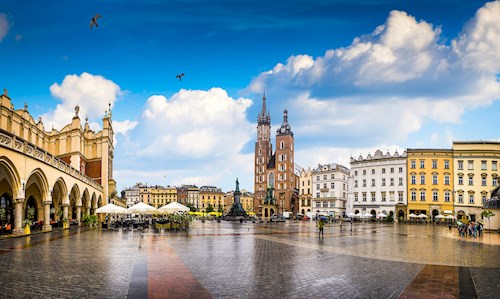 The best food and drink

There are plenty of great places to eat and drink in Krakow - if you’d prefer somewhere more traditional or a bit fancy, head to the area to the south of the main market square in the mediaeval Old Town. The newer and trendier eating and drinking places can be found around Kazimierz or Plac Nowy, and there are some great Jewish restaurants along Szeroka. If you’re on a tight budget, Krakow has plenty of great cafes – in the summer, you’ll find lots of lovely places to eat, drink and watch the world go by in one of the pavement cafes on Rynek Glówny. For a night of sampling Polish beer and vodka, head straight for the Old Town – there are streets lined with bars, many of them hidden underground, and you’ll be sure to find a favourite in no time!

The best way to get around

When it comes to Krakow’s Old Town, exploring on foot is not only the best way, it’s often the only way – much of the area is off-limits to cars. You’ll be rewarded with a fantastic tour of Polish history and architecture, so it’s well worth it lacing up your walking shoes and taking to the streets. If you’re travelling further afield, Krakow’s trams are popular and good value, but get very busy at peak times. Buses run all over the city until late into the evening, and taxis are plentiful too, so you won’t be short of a safe ride home at the end of a night out.

The best events and festivals

The Krakow Film Festival has been running for more than 50 years, showing movies from all over the world in May and June each year. There’s also a fantastic Jewish Culture Festival in June and early July, offering a variety of cultural events including film, theatre, art and music, and wrapping up with a big open air concert. Krakow knows how to do New Year’s Eve too – there’s a classical concert for culture-loving ticket holders, and fireworks and music in the Rynek for everyone else to see in the New Year.