We have lots of apartments in Istanbul

What you need to know about Istanbul

Istanbul is one of the world’s great cities, full of historic sights, artistic masterpieces and a bustling, vibrant culture of music, food and hospitality. It’s the only city in the world that straddles two continents, Europe and Asia, and this east-meets-west culture is at the very heart of what makes Istanbul so special. 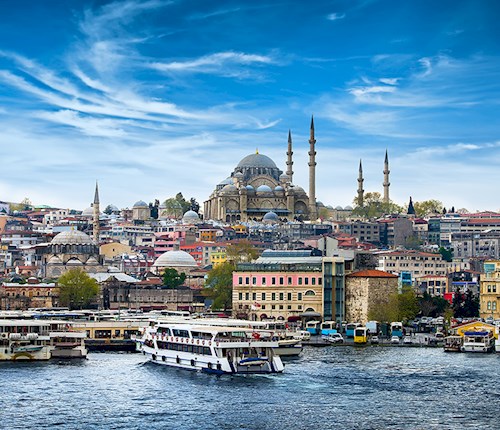 The elegant domes and minarets of the city’s many Ottoman mosques and palaces dominate the city’s skyline; a visit to Topkapi Palace will show you where the Ottoman sultans lived for over 400 years. You can spend days wandering the bazaars and street markets of the city, soaking up the sights and sounds of this extraordinary city, and treating your senses to a world of colour, noise and exotic aromas. Modern Istanbul is cool and cosmopolitan too, packed with well-travelled locals who like to dine and socialise in style, so find a table overlooking the Bosphorus and make the most of this mesmerising and unforgettable city.

Istanbul’s restaurants and street vendors showcase one of the world’s most famous cuisines, with mouth-watering flavour on offer everywhere from swanky riverside restaurants to street-corner carts. You can eat well for very little, or blow the budget on an unforgettable exploration of Turkish cuisine that will probably be one of the best meals you’ll ever eat, with classy restaurants offering stunning views of the Bosporus on both the European and the Asian side. The city has a wonderful range of rooftop bars too, serving stylish cocktails, local wine and Raki – if that’s not your thing, experience a Turkish coffee in a traditional shisha café and watch the world go by. 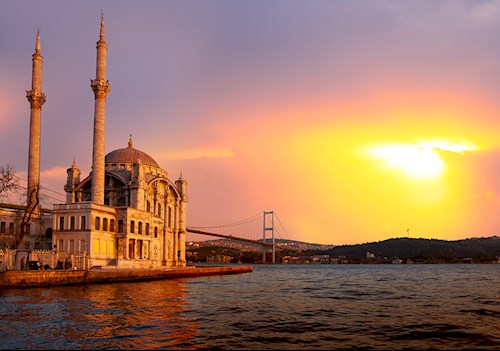 Exploring Istanbul is all part of the adventure, but attempting to drive is a recipe for going nowhere, as traffic in the city is often at a standstill. The public transport network includes a comprehensive range of buses, ferries, funicular railways, subways, trams, trolley buses and trains, and you may need to use a combination of these to get where you want to go. Taxis are everywhere – either private cabs or yellow ‘Dolmus’ minivans that travel along set routes, only departing when the vehicle is full. The historic Sultanahmet neighbourhood is best explored on foot – you’ll find the famous Blue Mosque and Topkapi Palace here. If you want to see the city from the river, there are many tours of the Bosphorus, and you can usually buy a ticket on the day.

Istanbul plays host to an exciting calendar of events throughout the year, and is particularly renowned for its music festivals. In June and July the International Istanbul Music Festival showcases over 30 performances of classical music, opera and dance, many of them performed in historic locations around the city. It’s followed by the International Istanbul Jazz Festival in July and the Blues Festival in November, all of which have played host to some of the biggest names in music. If you’d rather watch men covering themselves in olive oil and wrestling (and who wouldn’t?), head out of the city to Edirne, where the annual Grease Wrestling championships are held every year in July.