We have lots of apartments in Abu Dhabi

Where to stay in Abu Dhabi

Where to stay in Abu Dhabi

Khalidiya Palace Rayhaan by Rotana
from

Al Rawda Arjaan by Rotana
from

Abu Dhabi is the cosmopolitan capital of the UAE, and the largest Emirate in this oil rich country. It may not have the glitzy party reputation of its neighbour Dubai, but it’s a far more green, attractive and liveable city, with a sense of being more in touch with its Arabian roots.

Abu Dhabi is a conspicuously wealthy metropolis, packed with theme park-style shopping malls and gleaming skyscrapers, white sand beaches and flamboyant monuments. From your serviced apartment you can explore the stylish Corniche Road on the waterfront, along with the Sheikh Zayed Mosque, one of the world’s most elaborate places of worship.

Abu Dhabi may not have Dubai’s reputation for world-class cuisine, but that doesn’t mean that you can’t eat outstanding food here, particularly if you choose one of the many restaurants serving authentic food from the region. If you visit during the month of Ramadan, you’ll find all restaurants closed during the day, although the larger hotels will generally provide a space for non-Muslims to eat.

Once evening comes and fast is broken, the streets and restaurants are packed with locals enjoying good food and a party atmosphere. As in other regions of the UAE, only hotel bars are allowed to serve alcohol, so this is where you’ll find all the best nightlife.

Abu Dhabi is a shopper's paradise, full of shiny malls that look like marble palaces packed with fashion, accessories and international designer labels. The Abu Dhabi Mall and the Marina Mall are the best of the bunch – don’t forget to take in the musical fountain at the Marina Mall. The Galleria on Al Marayah Island is the glitziest addition to Abu Dhabi’s malls, with 130 of the world’s biggest luxury brands under one very glossy roof.

For traditional crafts, spices, gold and carpets, head to one of the city’s bustling souks – it’s a great place to land a bargain, particularly if you’re good at haggling! The Al Ain Souk (also known as the Central Souk) is the best place to see how traditional business has been done in this region for centuries.

Oil and gas are central to Abu Dhabi’s economy, and it’s the largest oil and gas producer in the UAE by a country mile. However the city is diversifying into non-oil related industries, and in recent years has made significant investment in real estate, tourism and retail.

Like its neighbour Dubai, Abu Dhabi is a city built for big shiny cars; there are plenty of them here, and traffic jams are common. Taxis are a relatively cheap way to get around, and you can flag a silver cab down from outside your serviced apartment, or anywhere in the city. But if you’d rather travel with the locals, the bus network around Abu Dhabi is comprehensive and cheap, with regular routes covering the whole region.

If hiring a car is your only option, be aware that locals are notoriously reckless drivers, and driving after drinking alcohol is not tolerated – even driving under the influence of one glass of wine can put you in prison for a month.

Abu Dhabi welcomes visitors from all over the world, but it politely requests that you show regard for local culture and customs. Dressing modestly is considered courteous, and dancing, drinking and smoking in public are not permitted, nor are public displays of affection beyond a mixed sex, married couple holding hands. 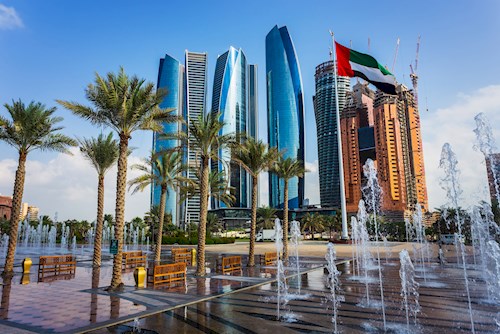