The Cannon Workshops is located in Canary Wharf, East London. Anyone visiting the area today that is unaware of the history might be surprised to spot the remains of a still thriving, yet very different past.

Before we get started, why is it called Canary Wharf?

Let's break this down into the two words, starting with Wharf, which stands for “ware house at river front.” Pretty simple explanation. Now for the longer explanation about the name Canary.

One of the buildings was previously used for fruit shipments from the Canary Islands – one of which, Gran Canaria, gets its name from the many dogs found on the island (Gran Canaria meaning Great Island of dogs).

The docks are located on the Isle of Dogs, so for one reason or another, the name stuck!

What was Canary Wharf before it was a centre for business?

Canary Wharf used to be one of the busiest docks in the world between the 19th century and early 20th century. It imported goods such as sugar, rum and even elephants from all over the world.

Hence the name of the bar Rum & Sugar, located in one of the old warehouse buildings on the North Quay. 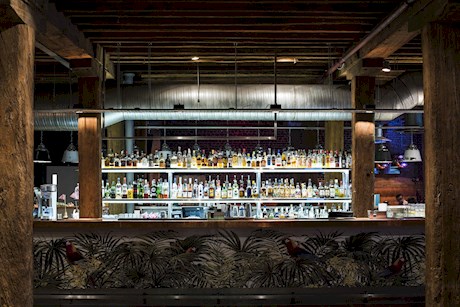 During World War II the docks were a major target for air raid attacks. The tactic was to bomb the major supply route so that food and other goods would be cut off to large parts of the UK.

It's estimated that around 2,500 bombs were dropped on the area during the war.

As a result of the bombing, lots of the original buildings were rebuilt. Today, some of the buildings remain and are listed, so they cannot be heavily modified – and Cannon Workshops is one of them.

Why Canary Wharf ceased operating as a dock…

Basically, the docks were not suitable for larger cargo ships which became common in the 1970s, so vessels were unable to deliver goods.

The large cargo ships were a result of what's called “containerisation”, which means that goods are now shipped in large containers and transported that way, too. Back in the day, goods used to be sorted and organised at the dock before being shipped out across the country.

There is a large port based further out in Essex called The Port of Tilbury, which handles large container ships and services much of London and the South East now.

The area had become very run-down, with many derelict buildings and people living in terrible conditions.

In the 1980s, the government stepped in to help regenerate the area. They offered tax exemptions and capital allowances to incentivise building in the area.

Prior to building work in the area which was completed in 1991, the City of London made plans to create more office space because they saw Canary Wharf as a threat to their business area.

The City of London’s plan worked and led to the initial failure of Canary Wharf - definitely not the case today.

Canary Wharf has excellent transport links thanks to the DLR, was originally built around 1987 -around the same time that City Airport opened.

London City Airport links directly to Canary Wharf via the DLR and only takes 11 minutes. The Docklands Light Railway even uses driver-less trains.

Fascinating Fact #3: The Ledger Building, which is now a JD Wetherspoons pub, was home to the dock records and paperwork. It's a beautiful building and serves cheap alcohol, so it's always busy!

What is Cannon Workshops?

Cannon Workshops is a quadrangle building, originally just outside the main dock area. It was used for storage, as workshops for carpenters, coopers (barrel and cask builders) and various businesses over the years.

The name comes from a cannon which has always lived just inside the entrance archway to the workshops. In 1980, as the area was being redeveloped, plans were put in place to convert the existing area for small and local businesses to use.

Fascinating Fact #4: You'll notice that all of the units have red doors – the buildings at Grade II listed and have regulations in place that state they cannot be altered.

There is a huge range of diverse businesses within Cannon Workshops, including personal trainers, accountants and even a German kitchen manufacturer and showroom.

The area is popular because of the lower business rates being offered to small businesses, helping them

Fascinating Fact #5: The HSBC building sold for a record £1.1 billion in 2007, which was when property prices were at their peak.