The Spectator's Guide to Wimbledon 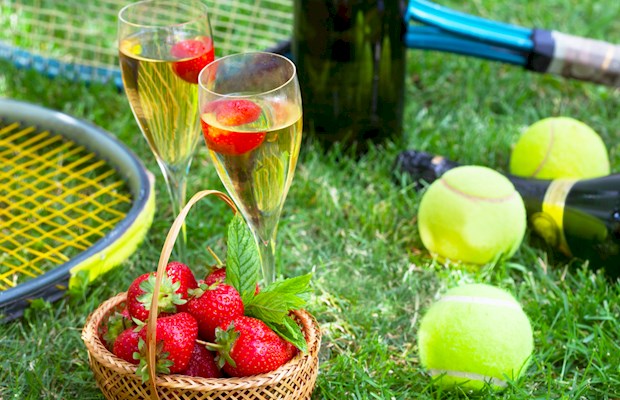 Nothing says British summertime like the Wimbledon tennis tournament! We've got everything you need to know about getting tickets and enjoying a day watching the fast-paced sport.

July brings with it luscious green grass courts and eagle-eyed spectators snacking on strawberries whilst perched on a hill; nothing says British summertime like the Wimbledon tennis tournament. We’ve all seen it on TV, but actually being in the vicinity of the All England Club at this time of year is a very special experience.

What you need to know
Wimbledon usually runs between the end of June to the beginning of July, although this year the tournament starts a little later on the 1st July and runs until 14th July. The action kicks off with the reigning men’s champion playing on Centre Court, with men’s singles and ladies’ first round heats following on. The reigning ladies’ champion graces Centre Court on the second day of the championships to face her competition. Doubles matches don’t get started until the third day.

How do I actually get Wimbledon tickets?
If you are super organised, then you will have entered the ballot for tickets in December. Do not fear if you do not possess that kind of forward-thinking or if you were unsuccessful in securing tickets. There are other ways to get your hands on them.

Queuing
Indulge yourself in the great British pastime of queuing to get your tickets. Camp out all night, sing silly songs and bring folding chairs and union flags to make the experience all the more enjoyable.
A limited number of tickets are released each day for matches the following day on Centre Court, as well as Courts 1 and 2. This rule does not apply on the last four days of the tournament for fixtures on Centre Court.

The queue opens at Gate 3 Turnstiles at 8am. There is a strict rule that tickets are one per person in the queue, so make sure the whole of your party is alongside you.

Make sure you keep your queue card safe. This is issued to you upon arrival and is stamped with a number and date to ensure your position in the line is retained. It will be checked when you enter into the Wimbledon grounds.

At 7.30am, those at the front of the queue are issued with wristbands for the show courts. As the number of these exactly matches the amount of tickets available, this will dictate whether you are heading to Centre Court or Courts 1 and 2.

If you do not receive a wristband, do not be despondent, as there are thousands of ground passes up for grabs each day. They offer unreserved seating and standing room in Courts 3 to 19, which can represent a fantastic day of tennis. Or alternatively, head towards Henman Hill and watch the glory from the big screen.

Wimbledon is a wonderful event to share with clients or colleagues, so you could turn it into a business trip. This can be an especially good idea if you know that any of your contacts are particularly into their tennis. Hospitality packages do not come cheap but represent an opportunity to impress clients unlike any other in the UK.

Murray Mound
Anyone with a grounds pass can decide to join in the fun on Murray Mound. This area to the north of Court 1 was affectionately known as Henman Hill for a while but is now referred to in reference to Andy Murray. Its official name is actually Aorangi Terrace, with Aorangi meaning Cloud in the Sky in Maori. It’s a fantastic place to soak up the atmosphere and watch the action unfold on the big screen. If you haven’t got tickets for one of the show courts during the finals, then this is the place to be.

Traditions
Going to Wimbledon is about more than just watching the tennis. It’s a great British tradition which allows you to enjoy some delicious strawberries and cream, washed down by a glass of Pimm’s, which has been served at Wimbledon since 1971. Getting dressed up is another element of Wimbledon that can be embraced. This generally means showing your allegiance to players of your home nation. You can go as big and bold as you like, with union flags all over your outfit or you could go for something a little subtler.

What’s changed this time around?

This year Wimbledon is attempting to become more sustainable by offering fully recyclable water bottles which are made from 100% recycled material. Fewer plastic bags will also be used, 4,500 fewer to be exact, as they’ve been removed from the racket stringing process.

Another change Wimbledon 2019 brings with it is that the start time of morning matches this year have been moved ahead by 30 minutes, beginning at 11am instead of the usual time of 11:30am. However, there is no change on Centre and Court One – play will still commence at 1pm.

As we all know how unpredictable British weather can be, Court One receives a new addition this year of a retractable roof which aims to stop inconvenient delays. Extra rows of seats have also been added around the back of the court which has increased the arena’s total capacity to 12,345 – it cost around £70 million and took more than five years to build!

We've got a wide variety of apartments across London!