We have lots of apartments in Dublin
Quick Links
1. Apartments 2. All properties in Dublin 3. Things to do in Dublin

Where to stay in Dublin

Where to stay in Dublin

Show all properties in Dublin
Things to do in Dublin

The writer James Joyce once famously said “When I die Dublin will be written in my heart”. And once you’ve visited, you’ll understand why people are so charmed and captivated by Ireland’s capital city. Dublin offers such an alluring mix – it’s steeped in history and heritage, small enough to explore easily, and has a uniquely Irish touch of wit and hedonism that makes you want to pack your bags and move there forever. 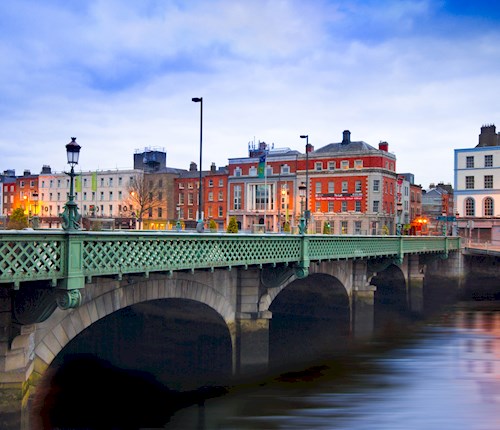 Dublin isn’t known for its gourmet cuisine, but the café and restaurant scene has improved significantly over the past couple of decades, with plenty of modern European and international dining options to choose from.

It’s not the cheapest place in the world to eat out, so it’s worth keeping an eye out for early bird or pre-theatre set menus which offer better value. Alternatively, you can buy fresh local produce to prepare from the comfort of your serviced apartment.

Most of the restaurants are south of the river in Temple Bar, which is conveniently where Dublin’s biggest bar scene is too. Social drinking is pretty much a religion in Dublin, and the city has over 1000 drinking places to choose from, from trendy bars to local pubs where you can savour your pint of Guinness and make plenty of new friends.

Grafton Street on the south side of the river is home to Dublin’s big brands and department stores, and there are plenty of quirky boutiques, artisan products and world foods in this area too, particularly in the Market Arcade.

You’ll find leprechaun and shamrock-based tat everywhere, so you won’t have to look far to satisfy your need for local souvenirs.

Dublin also has a thriving market culture, with the Moore Street Market being the oldest and best for hunting down a bargain – it’s where the locals shop, and it’s packed with shouting stallholders, character and charm.

Don’t forget that Ireland uses the Euro, and most Dublin shops are closed on Sundays!

Guinness has been brewed at the St. James's Gate Brewery since 1759, and is still a large local employer. And in more recent years economic growth in Ireland has attracted many global pharmaceutical, technology and communications companies to Dublin, including European HQs or operational bases for Microsoft, Google, Amazon, eBay, PayPal, Yahoo!, Facebook, Twitter and Pfizer.

Dublin is a lovely compact city and most of the main attractions are in the centre, so it’s great for wandering around and soaking up the atmosphere.

If you want to rest your feet, hop on one of the two tram lines that cross the city centre, or take advantage of one of the 200 bus routes in and around the city.

The main train station will take you to the suburbs and further afield in Ireland, or if you prefer two wheels, you’ll find that Dublin is one of the most cycle-friendly cities in the world, with over 120 miles of cycle lanes.

Dublin may be small by capital city standards, but it has the biggest city park in Europe - Phoenix Park is twice the size of New York’s Central Park and five times bigger than London's Hyde Park.