Where to stay in Netherlands

What the experts say...

"Such a stunning place."

"Staying for a few weeks or visiting for business - Wittenberg can easily cover all of your needs."

"A wonderful place to unwind!"

"The perfect base to explore such a wonderful city but far enough away to get some well-deserved rest."

"Wittenberg is full of charms that will make you go "OOOO" when you arrive."

"An easy going, homely retreat to help settle you into the routine of local living."

"It was lovely to stay at the Wittenberg apartments – I didn’t want to leave!"

What you need to know about The Netherlands

The Netherlands is one of Europe’s treasures – an alluring blend of flower-filled countryside, glittering canals, fairytale villages, historic windmills and expansive beaches. 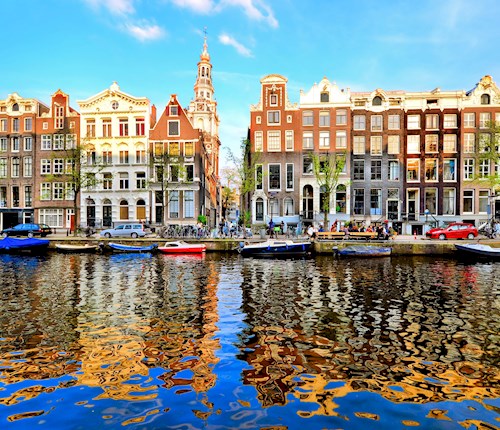 It’s a country steeped in fine art and cultural heritage, with more bicycles than people and a sense of fierce pride, warmth and inclusivity. Discover the museums and architecture of great cities like Amsterdam and The Hague, then cycle through the towns, villages and tulip fields of the Dutch countryside, where you’ll find an unchanged landscape of pretty gabled townhouses and historic churches.

The Netherlands is a masterwork in reclaiming land from the sea – it’s a largely man-made country carved up by dykes and canals, with the highest population density in Europe and a diverse cultural mix.

It’s clean, efficient, vibrant, welcoming and effortlessly cool, and pretty much everybody speaks English. What’s not to love?

Traditional Dutch cuisine is simple and hearty, and whilst the Netherlands isn’t known for its haute cuisine (fabulous cheeses aside), there are plenty of great cafes and restaurants where you can enjoy a great quality, flavourful meal.

The traditional staples of the Dutch diet are bread, cheese, meat and dairy products, although you can find a fancier menu in the Southern Dutch region – it’s known as Burgundian cuisine and is a mouth-watering mix of rich pastries, stews and soups.  But over recent decades the traditionally rustic Dutch diet has evolved to become more sophisticated, with a broad range of modern Dutch and international restaurants on offer.

Ethnic food is one of the best things about eating out in the Netherlands – most towns have an Indonesian or Chinese restaurant (often a hybrid of the two), reflecting the rich cultural history of this cosmopolitan country.

Whilst Amsterdam’s bar and café scene is legendary, there are also plenty of friendly bars in the smaller towns where you can enjoy a Dutch beer or two.

Shopping in Holland has plenty of variety and charm, from the bustling shopping centres and cobbled streets of Amsterdam and Den Haag, to the vibrant markets of the country’s towns and villages.

It’s the best place in the world to buy tulip bulbs, with thousands of varieties on offer to take home as an annually-flowering souvenir. Pottery is another local speciality, particularly from the beautiful town of Delft, although you can buy the iconic blue plates, pots and tiles all over the country.

Regional Dutch cheeses like Gouda and Edam are well worth sampling at one of the thousands of outdoor markets across the country – market shopping is a delightful part of Dutch shopping culture, and the best way to discover colourful foods, flowers and vintage finds.

The Netherlands is also an important centre for diamond trading – if you’re looking to buy something truly unique and special, head to one of Amsterdam’s many diamond merchants.

For such a small country, the history and culture of the Netherlands is extraordinary. You’ll discover museums bursting with Rembrandts, Vermeers and Van Goghs, whilst Dutch literature ranges from the Golden Age works of Joost van den Vondel to the WWII diary of Anne Frank, which has been translated and read all over the world.

The country’s architecture and design is practical and delightful in equal measure, from picture-perfect windmills to gabled wooden houses and eco-friendly clogs. The modern culture of the Netherlands is equally fascinating – the country has a rich history of social tolerance, including its famously liberal drugs policy, and was the first country in the world to legalise same-sex marriage.

The Dutch people are avid cyclists, witty and pragmatic, and get stuff done in a no-nonsense kind of way. If you can turn an inhospitable, below-sea-level country into a thriving, dynamic economy, you can probably conquer the world.

If you can ride a bike, the Netherlands is the perfect place to experience a country on two wheels, with the best cycle paths in the world, a pancake-flat landscape, and a culture that sees cycling as the best (and often only) way to travel.

If you’re travelling further afield, the Netherlands’ trains and buses are clean, comfortable and super-efficient, covering most towns and villages across the country. Cities like Amsterdam and Rotterdam also have a metro network, and you’ll find trams in Amsterdam, Rotterdam, The Hague and Utrecht.

A hire car is the best way to explore the more remote areas of the country, such as Zeeland and The North Sea islands – take your time, enjoy the scenery, and explore all the wonderful towns and villages along the way.

Cyclists rule the roads in the Netherlands, and most towns and cities have separate cycle lanes so they don’t have to ride in traffic. However you must give way to cyclists if you’re driving across a cycle lane - if you are involved in a collision with a cyclist, you will automatically be liable unless you can prove that the cyclist was in error, in which case you will still be half liable.