per night
Where to stay in Poland... Show all apartments in Poland
Popular Locations in Poland

What you need to know about Poland

Poland is one of the most culturally fascinating countries in Europe; and never more so than now, when economic development is transforming the country into a thriving, vibrant centre of innovation and commerce. However, scratch below the surface of the shiny new developments and you’ll find a nation steeped in history and tradition, with reminders of the country’s turbulent past everywhere you go.

Places like Warsaw, Wrocaw and Gdansk were wiped out in WWII, but they’ve been meticulously restored as thriving, cosmopolitan cities, the medieval city of Kraków managed to retain some extraordinary architecture, musical heritage and wonderful museums. In fact all of Poland is a living museum of European history, and a showcase of what a country can achieve through hard work, drive and passion. The landscape is also unexpectedly beautiful, with fabulously unspoiled beaches, mountains and lakes that have yet to be exploited by mass tourism – for now at least!

Poland is passionate about its food, with a cuisine that is mostly simple, flavourful, nutritious and filling. Polish food is delicious, (even though it can feel a little heavy to visitors!) and you’re unlikely to leave any on your plate! Local ingredients form the basis of a Polish menu, with pork and fresh vegetables being staples on a Polish dining table; you’ll find specialities like Barszcz (a beetroot soup similar to Hungarian borscht), grilled meat and breaded pork chops in most Polish restaurants. The national snack is a zapiekanka, which is a baguette topped with cheese, mushrooms and tomato sauce; but it’s desserts that make Polish dining truly special, with enough cream-stuffed and fruit-filled options to keep even the sweetest tooth happy.

The best things to buy on a shopping trip in Poland are local arts and crafts, particularly things like glass and enamelware, silver jewellery, hand-woven rugs and woodcarvings. Amber is also popular in the region around Gdańsk; you can buy it in jewellery, or simply in big lumps to use as a paperweight when you get home. For high street shopping, Warsaw and Kracow have a good range of department stores and fashion outlets, as well as some great markets and bric-a-brac stores where you can rummage for local treasures and vintage items. Warsaw is also wonderful for buying Polish art and graphic design, with many people visiting to buy collectable posters with striking graphics and bold colours.

Poland’s culture has evolved over centuries of occupation and turmoil, interspersed with periods of unification and prosperity. Kraków brings it all to life in one city, from the 10th century medieval castles to wonderful examples of Gothic, Renaissance, Baroque and Art Nouveau architecture. Modern Poland is a country in transition; whilst 75% of the population are Roman Catholic and observe the conservative customs of their faith, the young and urban population are more cosmopolitan, and are keen to be part of Poland’s growth and prosperity. As a more general rule, Polish people are dedicated hard workers, but also warm and passionate, you may find yourself engaged in a lively conversation over several glasses of Polish vodka, to which the only response is “Na zdrowie! (although most young Poles speak English, so “cheers!” will do!) 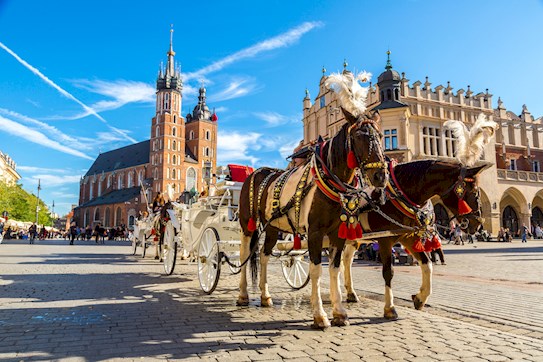 Poland’s transport network is still catching up with the rest of the country, but it offers a decent railway and bus network that covers all the major cities and towns. The road network was improved significantly for the Euro 2012 football championship, so it’s a much better (and safer) country for driving yourself around than it used to be; however traffic in the cities is awful and should definitely be avoided in a car. Instead use public transport – all the biggest cities have good bus and tram services, as well as a very good metro service in Warsaw. Poland is a lovely country for cycling, with some fantastic cycle paths and routes throughout the country that take in some of the loveliest landscapes and national parks.

Poland has some of the best beaches in northern Europe, particularly along the Pomeranian coast. The best is the white sand beach at Leba, which is also part of the Słowiński National Park. Tourists haven’t discovered the beach resorts of Poland yet, so enjoy them while you still can!