We have lots of apartments in Johannesburg

Known by locals as Joburg or Jozi, Johannesburg is the vibrant, flourishing heart of South Africa, and the country’s biggest city.

There’s been huge investment and redevelopment in recent years, particularly since South Africa hosted the World Cup in 2010; you’ll find lots of new office developments and smart serviced apartments, as well as some lively bars, restaurants and clubs. Despite the wealth divide between the stylish new developments and the townships, Joburg is a delightfully friendly and relaxed city, with a fascinating history and plenty to see and do.

Eating out is a big deal in in Johannesburg, and the locals consider themselves to be real foodies who know how to have a good time. The population of South Africa is also a rich and diverse cultural mix, reflected in the vast array of fabulous food on offer from Frikkadel (traditional South African meatballs) to casual Mediterranean-style dining, mouth-watering steakhouses and world-class ethnic food. The Newtown area is at the heart of Johannesburg’s thriving restaurant scene, and you should also check out Braamfontein and Doornfontein for drinking and dancing the night away in the coolest bars and clubs.

Joburg locals can quite literally shop for Africa, with 20 or so big shopping malls across the city stocking everything from locally-produced South African goods to international designer labels. If you only have time to visit one, the Rosebank Mall has a sophisticated, upmarket feel, with a great mix of department stores, designer boutiques, gift shops and outdoor dining.

There’s also a fabulous African market, and a flea market to poke around in on Sundays. If antiques are more your thing, check out 4th street in Parkhurst, which is known to the locals as ‘Antique Alley’, or excite your senses with some mouth-watering African food at the Congo Corner market.

As South Africa’s largest city, it’s no surprise that Johannesburg is the biggest commercial centre not just in the country, but also across the entire African continent. Most major corporations trading in South Africa choose Joburg as their base, including IBM, Hewlett Packard and management consultants McKinsey. You’ll also find the Sandton Convention Centre in Johannesburg, which is one of the largest event spaces on the continent.

The main attractions in Johannesburg are pretty spread out, so it can be a challenging city to get around. It’s not a practical city to explore on foot, so you’re better off hiring a car or using the excellent local bus service, which covers over 100 routes around the city. Taxis are another good option (although more expensive than buses), but you’ll need to book in advance, as you can’t hail taxis in the street. Most hotels, serviced apartments and attractions will be happy to arrange a taxi for you. 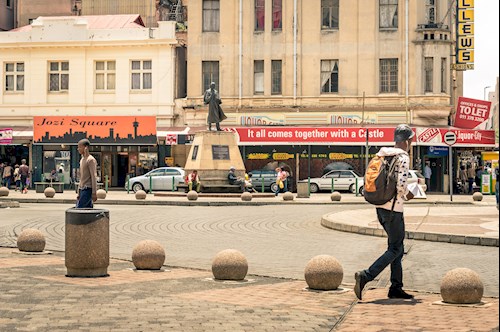