We have lots of apartments in Stockholm

What you need to know about Stockholm

Sweden’s captivating capital is one of Europe’s most beautiful cities, and certainly one of its more unusual. The city is spread across 14 islands, with delightful Lego-style buildings rising out of the cobbled streets in the medieval old town, dotted with parks and woodland. In summer it’s a stunning landscape of blue skies and glittering sea overlooking an archipelago of 24,000 islands, whilst in winter it’s all snowy rooftops and lights twinkling in the still waters. Whilst Stockholm may have plenty of old-world charm, it’s also a vibrant, modern city, full of great nightlife, friendly people and an ABBA museum. Which, let’s face it, is reason alone to visit this wonderful place. 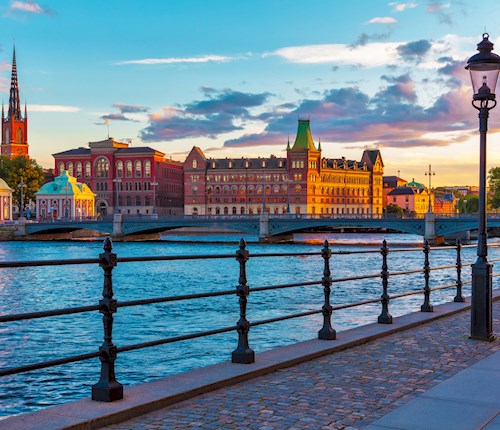 First, a word of warning – a night out in Stockholm can be eye-wateringly expensive, unless you’re prepared to subsist on fast food options like Tunnbršd, Sweden's variation on a burrito. However if you’re happy to splash out, you’ll find Stockholm’s dining scene and nightlife is well worth emptying your wallet. For the best dining, head to the island of Södermalm – the trendy area known as SoFo (south of Folkungagatan) is home to the city’s best dining and nightlife, or you can hop over a couple of islands to Kungsholmen for some of the latest up-and-coming restaurants. Being a city on the water, there are also plenty of boats that have been converted into restaurants – a lovely way to enjoy the city skyline over dinner and drinks.

Swedish design is legendary, but there’s plenty more to it than the largest IKEA store in the world (which you’ll find in Skärholmen). Stockholm is full of wonderful shops selling Swedish-designed clothes, textiles and the country’s famous handmade glassware – however it comes at a price, and you may have to search hard for bargains! The locals shop in the ancient cobbled streets of Stockholm’s Old Town, Gamla Stan, where you’ll find some lovely antiques and traditional gift shops, or you can head to Skansen for gorgeous craft stalls in summer. For high street brands, department stores and designer labels, head to Hamngatan in the Sergels Torg area – the center Gallerian is well worth a look around, as well as the large shopping area in Kungsgatan.

Stockholm has an extensive electronics and communications industry, with major employers including IBM, Ericsson, and Electrolux. There is also a major IT centre in Kista in northern Stockholm. Stockholm is also Sweden's financial centre, and most major Swedish banks, such as Nordea, Swedbank, Handelsbanken, and Skandinaviska Enskilda Banken, are headquartered in the city, as well as major insurance companies like Skandia, Folksam and Trygg-Hansa.

Stockholm’s public transport network makes it easy to navigate the islands of the capital, with an excellent network of trains, subway (T-bana), trams and buses. The subway covers most of the capital, but any areas not covered will have bus routes as an alternative. Stockholm taxis are the most expensive in the world, so you may want to check the price before you travel! For a more budget option, take to two wheels – Stockholm is a wonderful city for cycling, and there are bike paths and bike lanes all over the city. You can easily cycle between the islands and out to Djurgården, which is an area of outstanding natural beauty.

Not only are Stockholm’s taxis breathtakingly expensive, the pricing is also unregulated. Dodgy operators in the city have been known to rip off unsuspecting tourists, so make sure you check the price sticker in the rear window – it shows the maximum fare for a 10km, 15 minute journey. It should be around 300-350SEK – if it’s much more than that, steer well clear!