What you need to know about Turkey

Turkey is a country of infinite riches, whether you’re visiting to explore cool and cosmopolitan Istanbul, the dramatic landscapes of Mount Ararat, or the beautiful beaches of Bodrum. Turkey’s traditional bazaars and ancient ruins are just the beginning – 21st century Turkey is dynamic and creative, with a warm and welcoming people who are naturally outgoing and friendly. 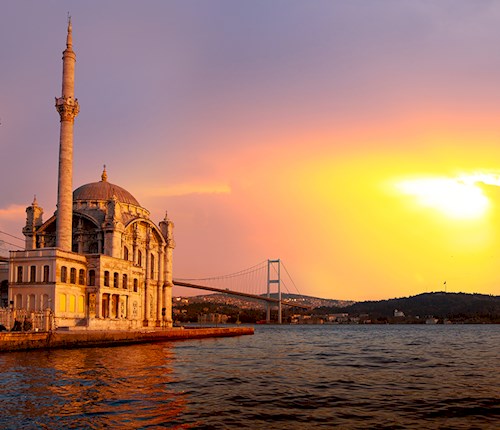 Go beyond the heat and bustle of the cities, and you’ll discover a traditional way of life that has remained unchanged for centuries, offering a world of ancient sites, unique crafts and flavour-packed cuisine to explore. Turkey’s unique position as a gateway between east and west has created an exotic and captivating culture that draws influence from the Mediterranean, the Balkan countries, Asia and the Middle East - the result is a country that’s easy to fall in love with, and hard to leave.

Food is at the very heart of Turkish culture, where eating together with friends and family is a time-honoured ritual, and the cuisine is recognised as being some of the best in the world. It’s a wonderful fusion of eastern traditions and western style, bringing together grilled meats and fish with flavour-packed vegetables, hearty soups, spicy dips and teeth-achingly sweet pastries and desserts. It’s easy to eat well for very little in Turkey, whether it’s a hearty meal in a village restaurant or a kebab from a street vendor. Every region has its own traditions and specialities, but a Turkish meze (selection of appetisers) is a great way to get a feel for the country’s food heritage. Turkey’s wines have grown in status over recent years, with plenty of rich reds and fruity whites to choose from. If you want to drink like the locals, a glass or two of Raki will definitely warm you up – it’s an aniseed spirit similar to Greek Ouzo, but considerably stronger!

Shopping in Turkey is a feast for the senses – you’re unlikely to head home without a souvenir or two, whether it’s a box of Turkish delight and some colourful spices, or a beautiful hand-woven Turkish rug. Big cities like Istanbul have a huge range of shops to choose from – in one day you can buy designer jewellery and big name brands in gleaming shopping malls, then explore a traditional Turkish bazaar for hand-made ceramics, textiles and exotic knick-knacks. Street markets selling local foods and flea markets selling antiques and second-hand goods can be found all over Turkey, so make sure there’s plenty of space in your suitcase for local bargains. Bartering is a way of life in Turkey, so be prepared to haggle for the best price; but make sure you want the item first – once you’ve agreed on a price, it would be considered very rude to walk away.

Turkey’s culture has evolved over 12,000 years, and is a fascinating melting pot of world history. The country has deep roots in the Balkans, Asia and the Middle East, which is reflected in Turkish art, music and cuisine, as well as the diverse ethnicities and religions of its people. For centuries Turkey was a key trading route between east and west, and Turkish textiles, artworks and hand-made crafts are still as spectacular now as they were then. Turkey has been a republic since 1923, and in recent years has become increasingly influence by western culture. The result is a delightful mix of new and old, where cities like Istanbul are vibrant hubs of creativity, and mountain villages still retain that old-world charm. Turkish people are naturally hospitable and friendly – don’t be surprised if the smallest of transactions leaves you feeling like you've just made a new best friend!

Pretty much all of Turkey is accessible by public transport, from domestic flights between the major cities to boats between coastal ports and trains and buses that criss-cross the country. The country’s train network is currently undergoing a major overhaul to provide high-speed links between the capital Ankara and other cities like Istanbul, so you may be better off using one of the many long-distance buses. These are a common mode of transport in Turkey, and it’s a great way to get to know the locals and see some of the landscape if you’re not in a hurry, and you can usually buy a ticket on the day. Car hire is relatively good value, particularly if you’re visiting out of season, when you may be able to pick up a bargain and explore at your own pace.

Tradition is hugely important in Turkey, so it pays to read up on local customs to ensure you don’t cause offense. If you’re honoured enough to be invited for a meal with a local family, always remove your shoes before entering their home, and follow your hosts’ lead on how to eat – if they use cutlery, you should do likewise. If eating from a communal bowl with your hands, only use your right, as the left hand is used for personal hygiene.