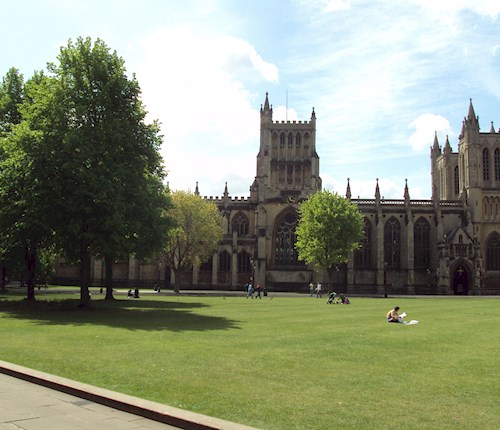 If you’re looking for a spot of relaxation after a busy day at work, or simply somewhere to unwind on your lunch breaks, College Green is the perfect place to spend an hour or two. Many local students and business professionals’ use its communal open area daily as a social space or even just as a place for a quick breath of fresh air. It’s a peaceful green public space located right in the heart of the city centre within close proximity to many nearby attractions and businesses. It’s open at all times every day, whenever you need some time to yourself.

This urban oasis is especially popular on a hot summer’s day - many people will congregate on College Greens 2.7 acres to host family picnics, walk their dogs or keep a watchful eye over their children playing. Bristol Cathedral marks the south side of the open space, whilst City Hall (which was formerly the Council House) sits just opposite. Many events are hosted here throughout the year, such as press calls, product launches, charity fundraisers and media launches so you never know what you might end up participating in. It’s also a popular place for tourists to take a pit-stop whilst sightseeing, as many historic and important public buildings, such as the Lord Mayor’s Chapel and Abbey Gatehouse, are not too far away. See if you can spot Queen Victoria’s statue at the crown of the green or even the statue of social reformer Raja Rammohun Roy in the south-western corner, close to the Central Library.

Grab a coffee from one of the nearby cafes and set up camp with your laptop or a good book for a few hours – you won’t regret it!

Perfect for sitting on a bench watching the world go by whilst eating your sandwiches! It is used throughout the day by every age group - and when it's sunny, you can't find a better place for just relaxing and taking in the views. Just brilliant - another of Bristol's little gems. 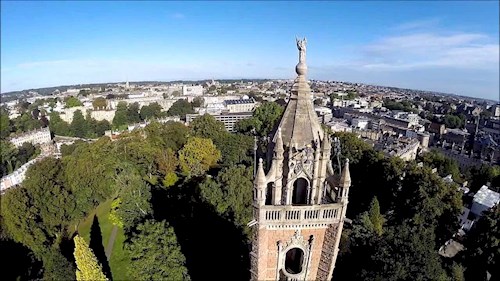 Also known as the oldest park in Bristol, Brandon Hill is a great spot located not far from Park Street and offers spectacular views across the vibrant city. Brandon Hill’s spacious outdoor woodland and the relaxing architectural oasis of Cabot Tower  are both perfect spots for a relaxing lunch break or a bit of out-of-office working, so bring your laptop!

Situated in the stunning parkland area of Brandon Hill is Cabot Tower – a 105ft building dating back to 1897 originally constructed to commemorate the famous voyage of John Cabot from Bristol to land which later became Canada. Beautiful paths winding around a children’s play area and a nature conservation area can be found here, allowing you a scenic stroll towards and around Cabot Tower. The magnificent tower was designed by William Venn Gough, a Bristol architect who was also responsible for a number of other prominent buildings in the city such as Colston’s Girls School, Queen Square House and Trinity Road Library. Notably, the Tower was built from gorgeous red sandstone and cream Bath Stone for embellishment and emphasis. You will find it residing in the centre of the park, free to access and open daily for visitors to climb up its twisting steps right to the top. Between 2007 and 2011 it underwent vital construction work costing an estimated £420,000 to make it safer for visitors after cracks started to appear. Thankfully, it has since been reopened for people from far and wide to come and enjoy its wonderful panoramic views. 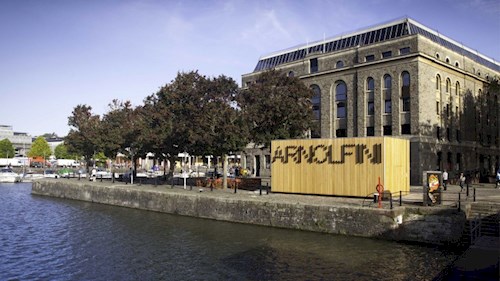 Professionals with an interest in contemporary art will love exploring Bristol’s Arnolfini gallery which is situated on the harbourside right in the heart of the city. It was founded back in 1961 and is an indoor exhibition centre dedicated to presenting and producing performance, film, dance, visual arts and music and events all constructed around a commitment to a ‘dynamic civic role in the city’.

An easy and interesting walk from centre city to this modern museum.

Arnolfini was recognised in 2016 for its amazing commitment to widening arts engagement and participation, and as a result was a finalist in the Art Fund’s Museum of the Year. Check the official website for its busy, never-ending programme of events and exhibitions so you can appropriately plan your trip. The Front Room is Arnolfini’s new public space which invites visitors to make use of its space either by working, socialising or simply relaxing.

As well as its amazing art, Arnolfini also houses one of the best independent, specialist art bookshops in the country which stocks over 100 intriguing magazines, books and newspapers on literature, art, film and design. Its outstanding range of books covers everything from postcards, to gifts and posters and of course, contemporary art. When you need a refresh, head over to the Arnolfini Café Bar which works in partnership with award-winning brewery the Bristol Beer Factory and overlooks the picturesque historic harbour. Sample a selection of locally-brewed beer, coffees, soft drinks and craft beers full of flavour as well as a delicious selection of pastries, cakes, tarts and sandwiches daily. In 2017 Arnolfini underwent new leadership of Director Clair Doherty, as a result it is currently undergoing highly significant changes which will continue over the next few years - watch this space!

Bristol’s harbourside is a very popular spot for locals and tourists thanks to its modern arrangement filled with a plethora of bars, restaurants, hotels and shops. The constant buzz of its lively atmosphere can be experienced daily due to its many waterside restaurants and bars as well as the sports and activities it hosts which include paddle boarding, cycling, yachting and rowing.

Many years ago, the harbourside was once a busy dock used by merchants and sailors for trading goods and setting sail on long-term voyages, but now it can be found in the central hub of Millennium Square which is noticeable from afar thanks to its grand fountains and huge outdoor screen. An array of attractions can also be found nearby such as the M Shed, Spike Island, The Matthew, Aardman Animation Studios, SS Great Britain, Bristol Aquarium, Arnolfini, the Watershed and We The Curious. Ideal on a summer’s day, the harbourside is a fantastic place for outdoor working, sat on the water’s edge admiring the boats coming in. Whilst walking around, look out for Banksy’s famous piece of artwork ‘The Girl with the Pearl Earring’ which is illustrated on a wall under the harbour clock as you enter the boatyard. Alternatively, visit one of the many bustling restaurants or bars for after work socialising with your colleagues. Some favourites include: The Stable which serves delicious, award-winning pizzas, unique gastro gallery Steak of the Art, Britain’s biggest restaurant Za Za Bazaar and Watershed Café Bar, The Grain Barge and No. 1 Harbourside all serving locally-brewed beer.

Cliftonwood’s candy-coloured houses can also be spotted from the harbourside, it’s one of Bristol’s most famous (and colourful) views and is unsurprisingly highly popular amongst Instagram moguls. The fascinating history of Bristol as a trading port spans all the way back to 1051 - by the 14th century the city was impressively trading with Portugal, Iceland and Spain whilst ships were leaving Bristol consistently to search for colonies in the New World. Eventually, the harbour grew popular as an active commercial port and then later transformed into the exciting leisure and business destination which we all know and love today.