Hidden gem on the edge of the Peak District National Park

1. Apartments 2. What the experts say 3. Things to do in Derby 4. Articles about Derby

Our Serviced Apartments in Derby

"I was so impressed by how large the apartment was! We didn’t feel cramped at all."

"We were impressed with the smooth process of our check-in experience!"

Where to stay in Derby

Show all properties in Derby

Things to do in Derby

Derby is a historic city that’s bursting with heritage – what was a sleepy midlands town in the mid-18th century became a major player in the Industrial Revolution almost overnight, and soon claimed its position at the forefront of the rail and manufacturing industries. Now it’s a charming and endlessly appealing little city with a beautiful cathedral, fantastic museums and great galleries.

It’s also in an enviable location on the edge of the Peak District, where you can explore some of the UK’s most picturesque countryside. Whatever your reason for visiting, you’ll find Derby is a friendly place, offering great value and a warm welcome wherever you go.

Whilst Derby is a small city, it has a surprising number of good quality restaurants offering worldwide cuisine, particularly in Friargate and the Cathedral Quarter. Here you can enjoy traditional English fare, spicy Mexican dishes and outstanding French cuisine, all against the dramatic backdrop of Derby Cathedral.

Derby is famous for its Sage Derby cheese and, since it’s only 30 miles up the road, it would be rude not to tuck into a slice of Bakewell Tart while you’re in town!

Derby also has some top notch traditional real ale pubs, the oldest of which is the Grade II listed Ye Olde Dolphin Inne, which has been serving proper ale since the late 16th century, certainly somewhere to put on your list even if you're just visiting for a short stay!

Derby has some excellent shopping options for such a small city – you can head to the Intu Derby Shopping Centre, which opened as a £340m investment in 2007.

Alongside all the usual high street brands, you’ll find a 10-screen cinema complex and a food court.

The picturesque Cathedral Quarter offers more independent shops and chic boutiques, in a delightful setting with plenty of cafes and restaurants where you can rest your arms from carrying all that shopping.

Derby’s manufacturing heritage in transport and engineering continues to this day– the two biggest employers in the city are Rolls-Royce Plc and Toyota.  Train manufacturing is another important local industry – you’ll find the UK’s only train manufacturer, Derby Litchurch, in the city as well as Bombardier Transportation, who make rolling stock.

However it’s not all heavy engineering – one of Derby’s longest-standing businesses is Royal Crown Derby, producing beautiful porcelain since the 1750s – it’s a lovely souvenir to take home!

Derby is the UK’s most central city, so it’s surprisingly easy to get to. By car, it’s just 15 minutes off the M1, and if you prefer to get the train, it’s only 90 minutes from London St Pancras, with additional direct services to Birmingham, Sheffield, Newcastle and Cardiff.

Derby is a great city to explore on foot or by bike, with over 100km of dedicated cycle routes in and around the city. Buses in Derby are good value and cover the whole area, from outside your serviced apartment right out into the Peak District, or you can book a taxi through any of the licensed city firms.

Whatever you call a bread roll - a bap, a bread cake, a roll or a bun – you’ll discover it’s called a “cob” in Derby.  Ask for a cheese and pickle roll at your peril - who knows what you might get! 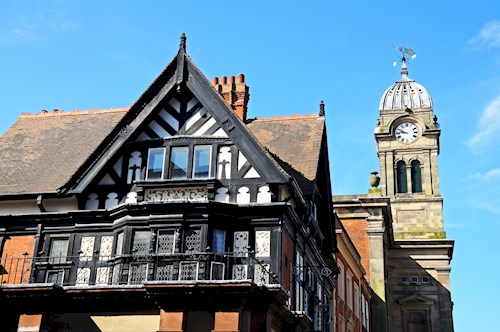