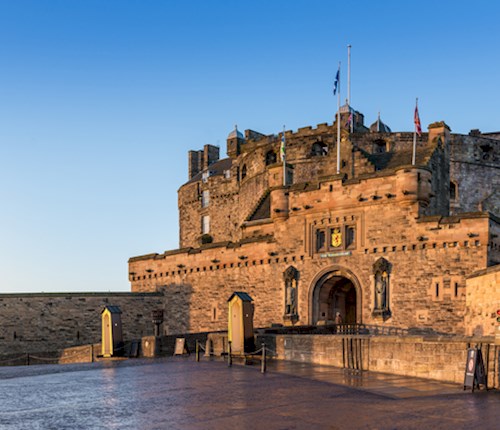 No Edinburgh stay would be complete without a visit to Edinburgh Castle, which can be seen in its hilltop position from all over the city centre. Discover the Half Moon Battery, Grand Hall and Scotland’s Crown Jewels, as well as stunning views of the city. Beware of the One O’clock Gun if you happen to be in the vicinity of the castle at this time of day, as it was used to allow the ships in the Forth of Firth to set their clocks – and it still continues to this day. It can certainly catch you by surprise…

Recently voted top UK Heritage Attraction in the British Travel Awards, Edinburgh Castle is impressively world-famous and rightfully takes the top spot as Scotland’s number one paid-for tourist attraction. Inside the castle grounds you’ll find the Crown Jewels of Scotland, the Stone of Destiny, the National War Museum of Scotland and many other interesting artefacts showcasing Scotland’s beautifully historic past.

Rich with stunning architecture and memories of a past life, the castle dominates Edinburgh’s skyline from its noble position on top of Castle Rock. A number of facilities are available within, such as cafes, shops, restaurants and several fascinating educational displays. The exquisite nature of the country’s most famous attraction has resulted in the castle becoming a recognisable symbol of Edinburgh and even Scotland. Delve into Scotland’s historic journey and take an audio tour around the castle and its grounds, which explains its architecture and dramatic past life.

When going to Edinburgh, you MUST visit the castle. The grounds are amazing, the views magnificent, and the castle has a great history which you can experience. Plan on spending at least 2-3 hours to see everything! 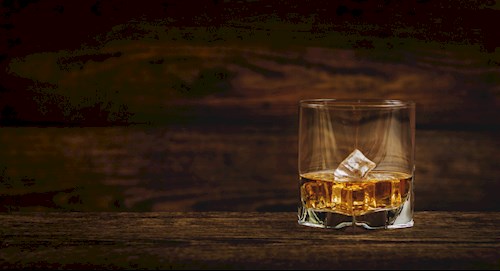 High-tech exhibits and fascinating tours at the Scotch Whisky Experience will help you to uncover the secrets of Scotland’s most famous alcoholic beverage. Take a barrel ride through Scotland’s whisky making process – all the way from the mass fields of barley to the distillery equipment which transforms it into what we know it as today. Feast your eyes upon the world’s largest collection of Scotch whisky for as little as £15.50 per adult and £7.50 per child.

Located in the former premises of Castlehill School, the Scotch Whisky Experience was first opened in 1988 with an impressive collection built up over 35 years by Claive Vidiz - a Brazilian whisky enthusiast.

Whether you’re a whisky expert or completely unfamiliar with the drink, a tour into the life of this Scottish national treasure is a must-do for everyone! This multimedia centre uses a series of exhibits, talks and demonstrations which combine sound, sight and smell to captivate audiences and teach them all about the formation of the drink. You will also find the world’s largest collection of malt whiskies here – 3384 bottles!

Those who are prepared to pay a little more for the experience will get to take part in extensive whisky tastings and taste samples of luxurious Scottish cuisine. On site, there’s also a restaurant which serves traditional Scottish dishes – some of which have been touched with a little dash of whisky.

A dream come true for a lover of Scotch. This place is amazing! You can sample a wide range of products with the assistance of friendly helpful staff. This is one of my favorite stops in a three week trip to the UK.

The paintings, sculptures, artwork is just stunning and all for free. Take your time and make sure that you cover as much as possible as you will find beautiful pieces in each gallery. 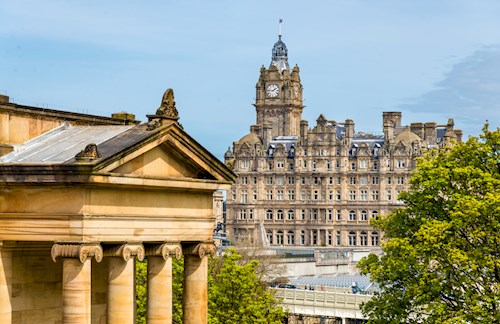 Edinburgh’s love affair with art is borne out of the fact it is home to no fewer than three of the National Galleries of Scotland. The National Gallery on the Mound and the Portrait Gallery are particularly convenient for a number of serviced apartments, while the Gallery of Modern Art is a must-see for those with more contemporary tastes.

Home to the country’s astonishingly vast collection of fine art, The Scottish National Gallery is one of three of Scotland’s world-renowned galleries and features paintings from the early Renaissance right through to the late 19th century. Masterpieces from major names such as Van Gogh, Monet, Raphael and Gauguin all live here and play an important part in one of the world’s best art collections. Inside the attraction, you can also find shops, a café and an award-winning restaurant which all contribute to an enthralling day out.

Alternatively, the Scottish National Portrait Gallery explores the story of Scotland through a wealth of images and stands tall as one of Edinburgh’s most iconic buildings. After a dramatic refurbishment, the gallery now features 17 new displays of traditional and contemporary works including royal figures, pioneering scientists, modern playwrights and female revolutionaries. Additionally in this second gallery, there is a shop, café, reading spaces and a touch-screen gallery to ensure guests have the most enjoyable day possible.

The third and final member of the National Galleries of Scotland is the Gallery of Modern Art – home to an outstanding collection of contemporary and modern art from 1900s to the present day. Two buildings form the gallery, Modern One houses a magnificent lawn and sculpture park and lives in a neoclassical building designed by William Burn in 1825. Modern Two sits facing its counterpart - built slightly later in 1833, the gallery houses an extensive collection of works by sculptor Eduardo Paolozzi as well as pieces by Salvador Dali, Rene Magritte and Alberto Giacometti. The Gallery of Modern Art is certainly a must see for art lovers everywhere. 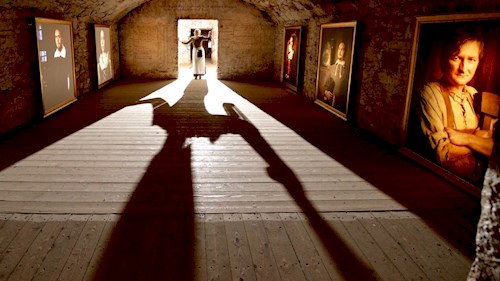 Underneath Edinburgh’s most famous street – the Royal Mile – lies an unlikely attraction. The Real Mary King’s Close was buried during the 18th century and became associated with myths and legends. Frozen in time, it is a fascinating place to find out more about the history of the city and those who lived there centuries ago.

If the walls could talk, the streets hidden beneath the Royal Mile would tell an extensively fascinating story of a warren of hidden ‘closes’ where real people lived, worked and died. An unmissable attraction that will interest everyone, discover the forgotten people of Edinburgh who had laid here abandoned for centuries. Costumed character tour guides will bring  the close to life in front of your eyes as you witness fascinating tales of murder, plague, pestilence and intrigue re-enacted.

Discover fascinating authentic truths of Edinburgh’s eerie past as you step down and explore the rooms, streets and spaces hidden underground. Boasting itself as Edinburgh’s only preserved 17th century Street, the attraction is accessed from the Royal Mile and is open all year round. Over 400 years of history are waiting to be explored…